The November Uprising by @3arabawy 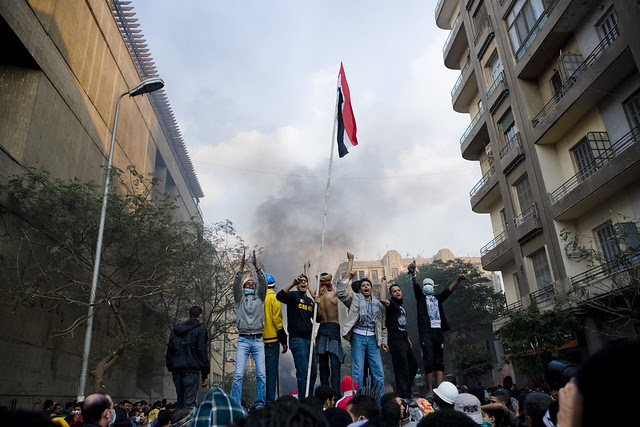 The Egyptian revolution will not be settled in 18 days or months. It’ll take “years” for the dust to settle, may be four or five, I don’t know. There will be waves, ebbs and flows, battles to be won and others lost.
This November uprising is only one chapter in the Egyptian revolution, but not the final one.
We have come a long way. We can all recall the mood in February when you could have been lynched in a protest by the people if you had chanted against the army. Now there is wide disillusionment with SCAF, and the majority of the public can clearly see today they are nothing but Mubarak’s army generals who are in effect leading the counterrevolution.
Those elections mean nothing. This “civilian advisory council” means nothing. The political process as it is currently in the making under the direction of SCAF is following the old Turkish model, whereby we’ll get to enjoy ourselves in elections and playing with civilian politicians in suits, while the brass gets to keep its share of the economy, immunity from prosecution or accountability.
We should never settle for anything less than a revolutionary cabinet that can send those SCAF generals to Tora.
As Tahrir loses steam, while #OccupyCabinet continues, we should not get demoralized over the end of the uprising. Mark my words, there are more coming, and they will be even more militant. The performance of the different shabab groups, whether the informal circles of radicalized youth as well as the revolutionary leftist groups, has been much more mature and organized than in January/Feb or the July sit-in. Even with their electoral gains, the absence of the Muslim Brotherhood in the uprising has deepened the rifts once again between sections of their youth and their opportunistic leadership.
The next uprising we’ll be stronger and more organized.
Millions took part in the current election circus. Their rush to vote is largely driven by the general desire to see SCAF go. The generals have played a dangerous game of raising expectations re the coming parliament, expectations that are already getting dashed every day with statements from the junta about the limited powers of the parliament or the expected cabinet. There is already a disillusionment process in the making, that will ignite the wrath of the public further with the first parliamentary session. I’m expecting floods of workers and civil servants occupying the streets around the parliament with their demands as soon as it’s open. And they will be demands that the inept parliament will not be able to meet, which will take the battle to a higher level.
We should not sit down and await the disillusionment to happen, in the same way we did not sit down in February in the face of a pro-SCAF tide. We held our ground firm then, and insisted SCAF were nothing but Mubarak’s counterrevolutionary generals. That position was not popular then, but today it’s different. And the people do not forget the positions easily and who said what and when. And as we have to suspend Tahrir and devote our remaining resources to #OccupyCabinet, we must not forget that the battle will only be settled in the workplaces and universities.
~ reposted by Sofia Smith
Posted by Palestine Solidarity Demo Information Centre at 9:42 PM