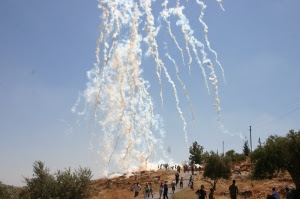 Tear gas canisters fired from a vehicle mounted launcher during a weekly demonstration in Bil In Photo courtesy of Bil In Popular Committee
“The Israeli government and its army have been for years now using the West Bank and Gaza as their testing ground. The Palestinians are their guinea pigs. The Israeli army uses tear gas that would probably be banned in any other countries in the world. They shoot tear gas, directly at protesters, once again, an illegal act. But a very rewarding one. Israel’s security industry is booming. It’s never been this good. Countries all over the world are buying Israel’s expertise in security, crowd control and weaponry every day. Israeli soldiers are training other countries commandos all over the planet”[1]
From the blog, Bil’in: A Village of Palestine, 02/01/11 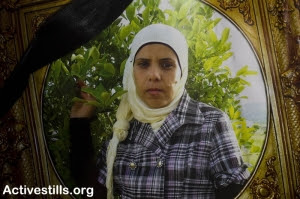 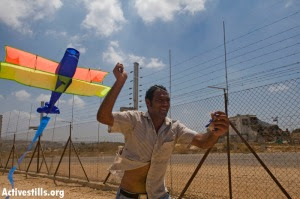 Bassem Abu Rahma – Killed by an impact wound from a Teargas canister fired at him while demonstrating in Bil In in April 2009 – Photo from Active Stills
On New Year’s Eve 2010, whilst much of the world was celebrating, over a thousand people demonstrated in the Palestinian village of Bil’in against Israel’s encroachment on the village’s land, Israeli tear gas and rubber bullets rained down on the protesters and Jawaher Abu Rahma, who had joined the march to the apartheid wall and retreated to the sidelines after the first Israeli volleys of gas, choked to death as gas enveloped the village.
A report from Bil’in residents said that “Israeli soldiers fired tear-gas from the moment protestors entered their sight. It is obvious that for the army, the mere presence of unarmed demonstrators is reason enough to use chemical weapons against them.”[2].
In September 2010 18 month old Mohammed Abu-Sarah from Issawiya died after tear gas, fired by the Israeli police in a residential area during a demonstration, seeped into his family’s living room.[2]
The Israeli military routinely uses CS gas against Palestinians.[3] Two suppliers of this gas are Combined Systems International (CSI) and Defense Technology in the US. Defense Technology is owned by the British arms giant, BAE systems.
The village of Bil’in has, since 2005, been resisting Israel’s apartheid wall and settlements which encroach on the village’s land. The community’s steadfast resistance has won an announcement, in February 2010, by the military that the walls route around the village would be altered [4]. However, this is not the only achievement of Bil’in’s struggle. The village has become a symbol of a new popular resistance to the Israeli occupation and has attracted international solidarity from all over the world. Bil’in’s fight has become a foundation of the joint struggle of Israeli and Palestinian activists against the occupation and has spurred the birth of the ‘popular committees’ movement against the wall and settlements. Statements from Bil’in have often provided a compass for the global movement for boycott, divestment and sanctions (BDS) against Israeli apartheid.
Bil’in’s successes have come at a price. That price is baldly illustrated in the story of the Abu Rahma family. In 2008 Ashraf Abu Rahma was shot at close range while detained by an Israeli soldier and badly injured (see video – http://www.youtube.com/watch?v=ly2I5AzfnrY)[5], In April 2009, Bassem Abu Rahma his brother, was shot at very close range by a tear gas canister and died from his wounds (see video here – http://www.youtube.com/watch?v=XuPJHK6rQ4Q)[6]. Abdallah and Adeeb Abu Rahma have both served hundreds of days in prison for their involvement in the popular struggle[7]. Despite all this Jawaher, their sister, kept returning to the demonstrations, week after week for four years, until, on December 31st2010, she collapsed from tear gas inhalation and died in a Ramallah hospital as doctors fought for her life.
Bil’in, and villages across Palestine, have become a testing ground for the Israeli security industry, and for international companies who need an arena to try out their wares. While unmanned bulldozers, aircraft and boats patrol and bombard the besieged Gaza strip and the latest in CCTV, fingerprint and bodyscanner equipment proliferate at the hundreds of Israeli checkpoints across the West Bank, Bil’in, and other villages engaged in the popular struggle, are subjected to countless experiments in so called ‘non lethal’, sometimes called ‘less lethal’, weapons technology. Bil’in’s non violent demonstrations have been attacked with bullets, plastic coated steel bullets, rubber bullets, baton rounds, water cannons firing corrosive chemicals, coloured dye and foul smelling water that will make you vomit, chemical and noise weapons. Many of these weapons will soon be found on the international market, after being tried and tested on the people of Palestine, whose deaths, whose suffering and whose grief is valued less than that of the people of London or Washington.
Anecdotal evidence, and this writer’s own expeprience, suggest that the strength of gas used at demonstrations varies and that, especially at protests during 2010, gas with a higher propensity to incapacitate has been used.
Although this force is branded ‘non-lethal’, 21 people have been killed by Israeli forces during the popular struggle since 2005.[8]
In a blog published a day after Jawaher’s death Bil’in residents reasserted that action for change is necessary and that “the BDS strategy… is a means for activists to unite under one manifesto. Corporations are divesting from Israel, trade unions are passing motions to boycott settlement goods, Universities are refusing to collaborate with their Israeli counterparts.”[9]
Israeli activists have responded to this call by blocking a main street in Tel Aviv[10] and holding a procession to the US ambassador’s house to ‘return’ CSI tear gas canisters, fired at demonstrators in Bil’in.[11] Twelve Israeli activists have been arrested for charges including ‘conspiring to possess weapons’ for carrying the spent canisters.
The manufacturers of these so called ‘non-lethal’ weapons should be an urgent target for the global BDS movement.
Calls have been made to target Combined Systems Incorporated (CSI) and Defense Solutions in response to the death of Jawaher Abu Rahma – see http://www.indymedia.org.uk/en/2011/01/471554.html.
The Companies:
Here are some of the international companies involved in supplying tear gas equipment to Israel
Combined Tactical Systems – http://www.less-lethal.com / www.combinedsystems.com - 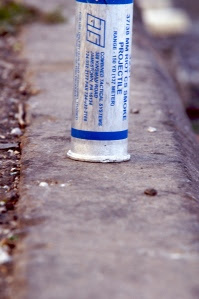 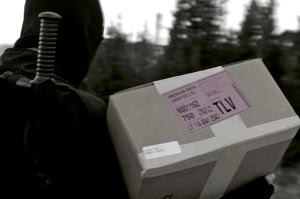 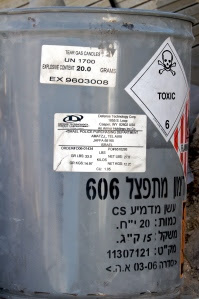 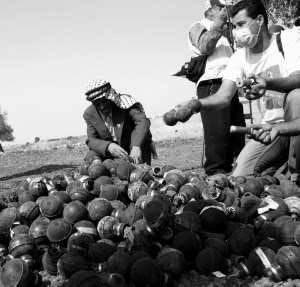 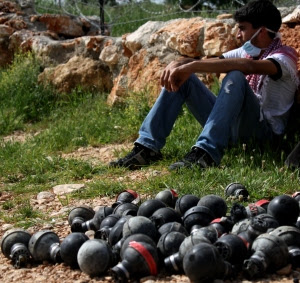 The above photos were taken by an independent photographer from Bil’in during the course of 2009-10. The photos show discarded shells which litter the village of Bil’in and the surrounding fields.
The tear gas canisters shown in the photo are of the ‘tear ball’ type, marketed by Combined Tactical Systems in the US 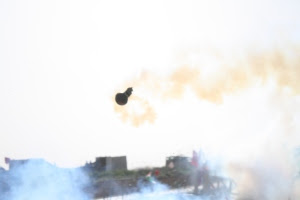 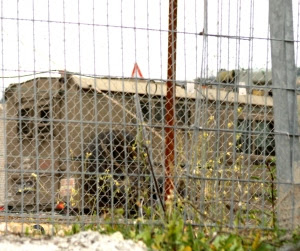 Israeli military vehicle equipped with tear gas launcher in Bil In – Photo courtesy of Bil In popular committee
In the past two years vehicle mounted tear gas launchers have been used at anti-wall demonstrations in Palestine. During March 2010 the village of Nabi Saleh was invaded by Israeli military vehicles firing multiple tear gas rounds from a vehicle. The gas reached every corner of the village, filling people’s houses. Similar scenes have been common in Bil’in where the army have repeatedly entered the village and deliberately shot tear gas into the residential area. 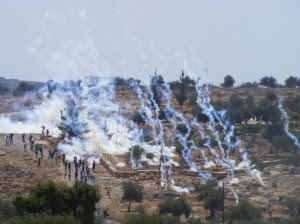 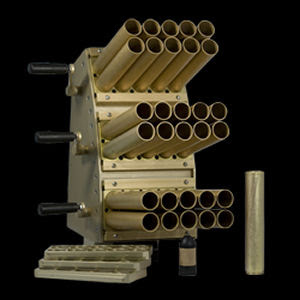 CSI’s Venom ‘Non Lethal’ Tube Launched Munitions System
The Venom is currently in use by the US marines in Iraq.[26]
Israeli troops have also been seen to use rapid fire hand launchers at demonstrations in Nabi Saleh and elsewhere. This video shows these hand launchers close to a built up area – http://www.youtube.com/watch?v=yFnaTMLrXSU&feature=player_embedded#! (from 2:19) [27] 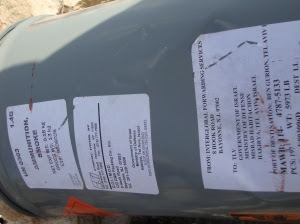 CSI munitions container discarded after demonstration against land annexation in Nabi Saleh – Photo from Corporate Watch
The hand launchers used by the Israeli military, again, are remarkably similar to CSI’s multi launchers (see, for example, http://www.combinedsystems.com/Pdfs/SOR_CSi_Spring09.pdf pp3)[28]. Penn Arms launchers are capable of launching six rounds in quick succession[29] and are in use by the US police.[29] 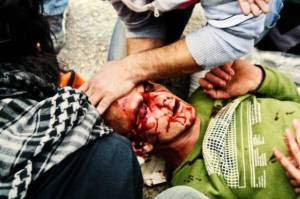