Songs for Palestine, Egypt and Tunesia

Israel's violations of Palestinian Human Rights - A Blind Spot and Smear on this World!

I'm reading the press releases about Gilad Shalit and the Palestinian prisoners that were released today. And all that keeps coming to mind is that I'm happy so many were released. But also that so so so many were in jail for absolutely no reason and many still are! This is unforgivable. This is another face of this brutal Israeli occupation. The media keeps harping on about the 'criminals' that are being released in exchange for Shalit. The IDF are the criminals! So many Palestinians still languish in Israeli jails. Many of them women and children! 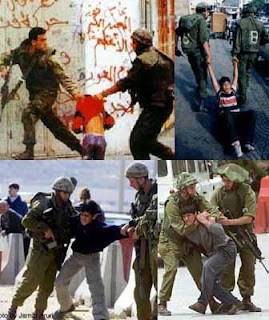 The picture above is what I'm talking about. And this collage of pictures is mild in comparison to much of what I look at on a daily basis. This needs to end and all Palestinian child prisoners MUST BE RELEASED!
So I won't post about Shalit. I instead focus on the release of the Palestinian prisoners. But this is not the end. This is just a beginning! The rest of the Palestinian political prisoners (which is what all of them are) and especially the women and kids must be freed.
It's like Israel's continued violations of Palestinian human rights in general and in addition the constant violations of the UN Convention on the Rights of the Child don't exist. It's a black spot in this world in more than one way. A blind spot. A smear on this world! I can't stand it!

Originally posted by Global Call to Boycott the International Harp Contest in Israel at http://boycott-israel-harp-contest.posterous.com/palestinian-art-depicts-womans-childrens-suff

Stephen R. Shalom: Why we need to divest from the US-backed Israeli Occupation

Originally posted by the israeli occopation archive on MARCH 2011 at http://www.israeli-occupation.org/2011-03-03/stephen-shalom-why-we-need-to-divest-from-the-us-backed-israeli-occupation/