Originally posted by +972 Magazine at http://972mag.com/watch-gaza-children-prohibited-from-visiting-imprisoned-fathers/72013/

This past month, for the first time since 2007, Palestinian children under the age of eight were granted permission to visit their parents in Israeli prisons. The decision to allow family visits to Palestinians in Israeli prisons was made last summer, following a six-week hunger strike by some 2,000 prisoners.
Palestinian kids from Gaza above the age of eight are still prohibited from visiting their parents – the same goes for grandchildren and siblings. There are over 500 prisoners – among them 14 minors – from Gaza held in Israel. Over 400 of them are “security inmates” and approximately 100 prisoners are “criminal inmates.”

Israeli human rights group B’Tselem has launched a campaign calling to allow full families visits to all Palestinian prisoners. Here is a short video with testimonies of children who have been prevented from meeting their fathers for several years now.

Posted by Palestine Solidarity Demo Information Centre at 6:37 AM No comments:

Originally posted by the Palestinian Centre for Human Rights (PCHR) at http://www.pchrgaza.org/portal/en/index.php?option=com_content&view=article&id=9518:state-of-the-gaza-strips-border-crossings-1-april-2013-to-30-april-2013&catid=144:new-reports

Posted by Palestine Solidarity Demo Information Centre at 6:26 AM No comments:

Originally posted by the Palestinian Centre for Human Rights (PCHR) at http://www.pchrgaza.org/portal/en/index.php?option=com_content&view=article&id=9524:pchr-refutes-findings-of-israeli-committee-concerning-killing-of-mohammed-al-durrah&catid=145:in-focus

Football Beyond Borders call out! #24May DEMO in London NO #U21euro in Israel!

Originally posted by Football Beyond Borders at https://docs.google.com/document/d/113Kd8CWoAzeSEBH2r6D4hUTnxXfJXrBjU9KzN63bVIc/edit
Brought to my attention by @BeaC48 via Twitter 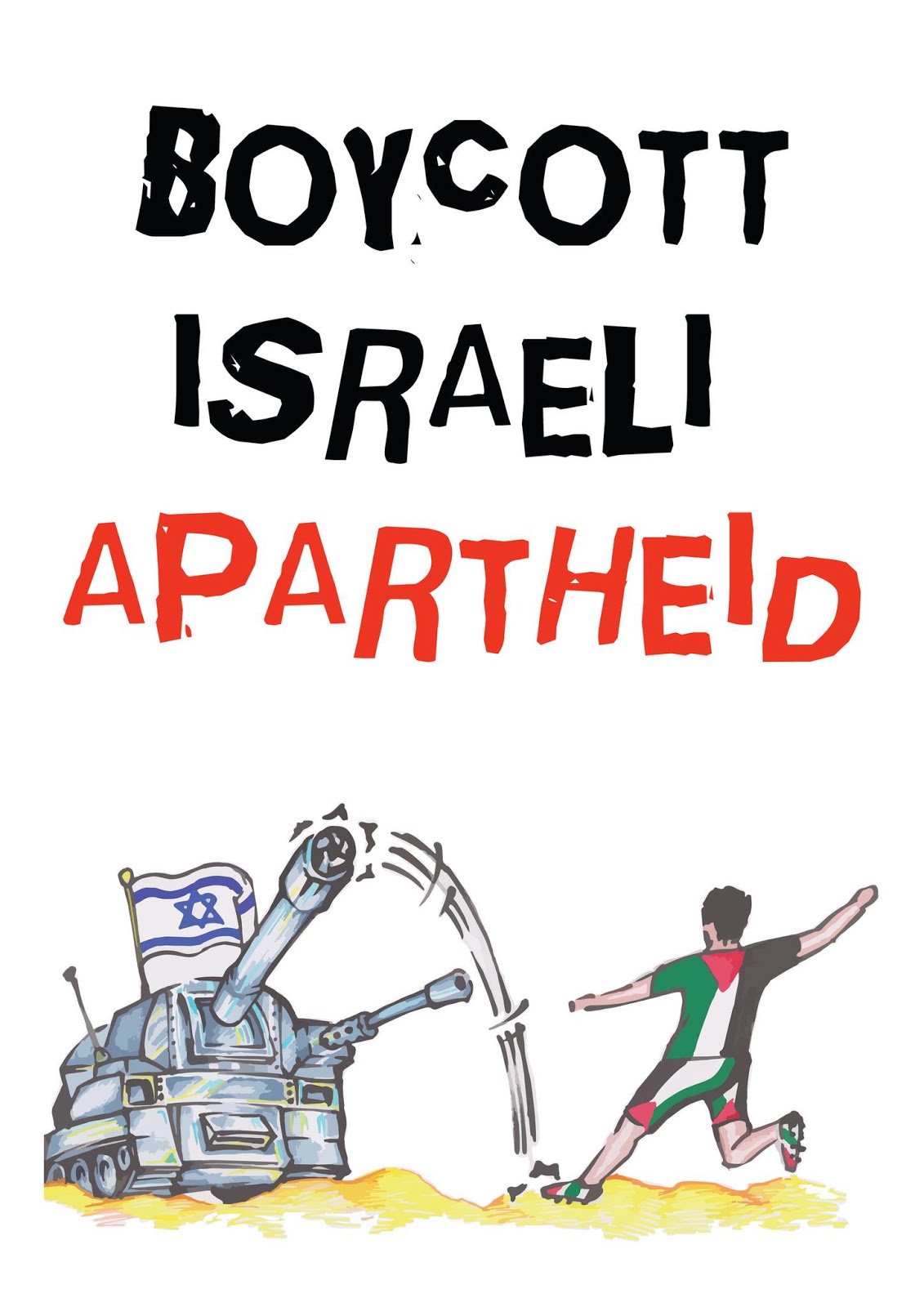 Please give us a couple of minutes of your time to read this very important call out.
To all the fantastic activists who have supported us over the last few months - We want to thank you all for supporting Football Beyond Borders and the Red Card Israeli Racism campaign, as we know we have been calling on your support regularly! Since March, the Football Beyond Borders team and a coalition of wonderful activists have been working on a campaign to raise awareness about, and demand an end to, the ongoing system of apartheid that has been imposed on the Palestinian people by the Israeli state.
We have used the universal language of football, and its unifying potential, to reach out to communities in the UK and around the world and ask for them to stand with us against racism in its most systematic form: apartheid. Whatever you think of the conflict and who started it, one thing cannot be disputed: Palestinians are treated as second class citizens, with little or no humanity, by the Israeli state - in a system that is reminiscent of apartheid against black South Aricans. The sports boycott of apartheid South Africa was a powerful tool that helped turn global public opinion against its racist policies and contributed to apartheid's downfall. Inspired by this astounding feat we have decided to once again call a Sport's Boycott - this time on Israel. The Israeli state has been ethnically cleansing the area of Palestine since Israel was created in 1948, a year in which 750,000 Palestinians were brutally exiled from their land by Israeli forces. This catastrophe or "nakba" is still ongoing, as demonstrated by the continued systematic and state-sponsored buidling of illegal israeli settlements on Palestinian lands, and the daily destruction of Palestinian livelihoods through unjust and illegal imprisonment and detention of the population - including Children, of which there are currently 236 in prison.
Israel's political crime's even extend to the world of sport - despite the persistent claims by political and sports authorities that sports and politics should never mix. Israel targets Palestinian sport on a regular basis, as it is one of the only avenue's that Palestinians have to enjoy life and take their mind off of the brutal occupation. Football is hugely popular in Palestine, something we can tell you personally as we spent an incredible two weeks in Palestine in 2011 with FBB playing football and engaging in social projects with Palestinians, who live and breathe the sport. We even filmed an extremely successful documentary, which helped transmit our experiences and continue our engagement with the Palestinian people.
So when we heard that Israel had bombed and destroyed the Palestinian national stadium in the recent Gaza offensive, and that a 13 year old boy had been shot dead by Israeli soldiers whilst playing football in an event that may have triggered the conflict, we knew we had to step up our actions. Already in 2012 we were part of a campaign that successfully helped publicise the cause of Mahmoud Sarsak, the young Palestinian striker who Israel had imprisoned for 3 years on no charges, and who they only released after an epic 3 month hunger strike and huge global outcry which extended to many professional footballers and legends such as Eric Cantona. During the November 2012 bombing of Gaza, 50 European football stars - led by Freddy Kanoute and including Eden Hazard, Demba Ba, and Abou Diaby - released a statement condemning Israel's offensive and called for UEFA to move the upcoming UEFA U21 tournament away from Israel rather than "reward it for actions contrary to sporting values". 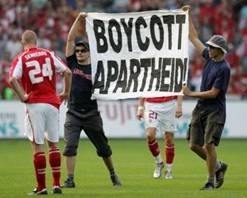 We have continued to build on these noble actions, and after an extremely well attended public meeting in March, we have been organising a massive public demonstration in London this Friday, 24th of May, on the day of annual UEFA congress being held at Grosvenor Hotel on Park Lane in London.
With the help of other activist groups, we have successfully planned a fantastic day of action! There will be a rally outside the hotel from 11-4 pm with music, important speakers and poetry (EVENT INFO HERE), and a loud and colourful march starting at 12 noon from St. Pancras station (EVENT INFO HERE) where we will meet over 40 activists coming from Europe to join us, and marching through the streets of London to join the rally at 2pm. Mahmoud Sarsak himself has been granted a Visa and should be here with us, barring any issues at the Gaza border, before spending a month touring the UK to raise awareness about his experience and the Palestinian cause. To top it all off, there will be a social evening event with live music, football and fantastic Palestinian food that night at the Albert in Queens Park (EVENT INFO HERE). Please come along to whatever you can, take the day off from working or studying (or at least half day) and join in on what will be an historic event - the first international march and rally against Israeli apartheid!
Thank you so much for taking the time to read this and for understanding how important this cause is to us as an organisation. We made some serious commitments to our hosts in Palestine in 2011 and promised that we would do our best to tell their story and highlight their cause. We hope this campaign goes some a small way to fulfilling that promise.
If you would like to hear more about the campaign please get in touch - we are always up for a conversation on this issue. We are also always looking for people to get involved, and this is just one of many campaigns that we at FBB are involved in - for example we will be running a Summer School at SOAS in London this summer, and we will be running our first ever mixed-gender tour, to the Balkans in September (also our first ever European tour) to tackle issues such as racism and gender discrimination through football.
IF YOU CANT COME THEN PLEASE SPREAD THE WORD - share the events on facebook (please like our FB Page) and twitter under #RedCardIsraeliRacism (Follow @FbeyondBorders and @RCIRacism)

Many Many thanks and much love to you all!
The Football Beyond Borders Team
Posted by Palestine Solidarity Demo Information Centre at 12:28 PM No comments: