Cultural Dimensions of the Palestinian Right of Return

In the Jordan Valley, Palestinians are struggling just to remain on the land as the predatory settlements and occupation authority make everyday life an uphill battle.
On 29 May, a group of Palestinians, internationals and Israeli activists joined the Jordan Valley Solidarity Project to help build a school out of mud bricks.
Nearly the entire Jordan Valley is under Israeli control (categorized under Area C). Lacking permission to even build a rainwater collection device, most communities suffer from a constant threat of home demolition. The day of action was about supporting Palestinians in the Jordan Valley to continue their steadfast resistance in the land. The Jordan Valley represents nearly 30% of the West Bank, and therefore is crucial to a future Palestinians state.
Diana Alzeer, 23, who helped organize the group, emphasized the importance to build bridges between the geographically diffused Palestinian communities, “I believe that part of activism and resistance is not only going to demonstrations, and I think it’s really important for us Palestinians to be in contact with the rest of our society including the hills of hebron, Jerusalem and different districts of Palestine.”
Continuing, Alzeer said, “The Jordan Valley is one of the places I think it is very important for volunteers to go to, because in that part of Palestine existing is actually resisting.”
Driving the group of activists along Highway 90, leaders from the JVSP pointed out the countless agricultural settlements that litter the area, explaining how Israeli settlements have appropriated the agriculture enterprise of the region, preventing Palestinian communities from maintaining their own livelihoods.
According to JVSP, the dearth of schools for Palestinians living in Area C force young Palestinians to find work on a settlement farm. Therefore, building schools in communities is of the utmost importance to restoring Palestinian independence and helping the communities to stay on the land.
To find out how you can get involved in helping community activists in the Jordan Valley, visit theJordan Solidarity Project .
Photos taken by Diana Alzeer. 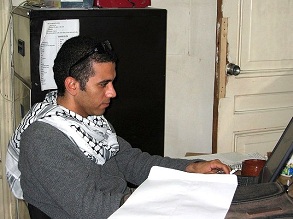 Picture originally posted on 'Another World is Possible' at http://bit.ly/jD56cN


Hossam el-Hamalawy, a prominent journalist/activist/photographer, has been ordered to appear before military prosecutors on Tuesday, May 31, 2011 at 10:30 am Cairo time. This occurred after an ONTv interview, where he spoke against military trials for civilians, spoke against violence perpetuated by the military police against activists/civilians and held the head of the military police responsible for these reported violations. The television station's well known host of the program, Reem Maged, was also summoned for questioning.

Ottawa's CBC radio conducted an interview with Hossam in regard to this summons tonight (May 30, 2011). A link to the full interview can be found below.

Today hundreds of protestors came to SCAF headquarters to support journalists Hossam el-Hamalawy and Reem Maged.  The following are the posts made by Hossam on twitter after he returned from SCAF headquarters (please read from bottom to top).

3arabawy Hossam عمو حسام
And seriously I want to thank all of those who came out to day to demonstrate on our behalf, I love u all!
12 hours ago

3arabawy Hossam عمو حسام
We were treated with respect inside. But Reem made it clear that just by summoning journalists it's considered an act of intimidation.
12 hours ago

3arabawy Hossam عمو حسام
The army doesn't respond that quickly as you all know, except with public pressure.
12 hours ago

3arabawy Hossam عمو حسام
But to make sure those cases are looked into, I strongly believe those cases should be highlighted by the media.
12 hours ago

3arabawy Hossam عمو حسام
But in all cases, we'll compile a file of the torture accusations and we'll be handing it in the coming days.
12 hours ago

3arabawy Hossam عمو حسام
And again, I'd like to stress that those cases we will b reporting have already been reported before, but no action was taken.
12 hours ago

3arabawy Hossam عمو حسام
And we also highlighted quickly some of the cases of the military crackdowns on protests, and the "thuggery" accusations
12 hours ago

3arabawy Hossam عمو حسام
And they were of great support. And I wanna thank those lawyers again
12 hours ago

3arabawy Hossam عمو حسام
The visit to the military prosecutor became later a "chat" where they wanted "clarifications" for my accusations against General Badeen.
12 hours ago

3arabawy Hossam عمو حسام
And I'm sure today's protest, as well as the public campaign, are the only reasons I'm out today.
12 hours ago

3arabawy Hossam عمو حسام
From what I understood Reem was coming in today as a "witness" while I was to be "questioned" about the accusations against Military Police.
12 hours ago

3arabawy Hossam عمو حسام
Thanks ya shabab for all the support today. Wallahi Wallahi I'm very humbled by your solidarity.