Carlos Latuff: My artwork is not for sale, It is about love. I love the Palestinian people!
Brazilian cartoonist and political activist Carlos Latuff visited Amman last month to present his groundbreaking work on his favourite subject: Palestine
Issue: Jun, 2009
words: Roba Assi images: Ibrahim Owais
“Why the hell is a bourgeois publication interested in interviewing a pro-Palestinian cartoonist?” asks the skinny 40-something in a black and white keffiyeh. If it wasn’t Carlos Latuff, the now legendary Brazilian political cartoonist, we might have been offended. But for a man who has made a career championing a political cause some 15,000 kilometres away from the home he shares with his working class parents in Rio de Janeiro, a cup of tea is probably a means of capitalist oppression. And having avoided the temptation to question why being pro-Palestinian and bourgeois were somehow mutually exclusive – he might want to visit Abdoun to appreciate how many Palestinians have successfully graduated from the refugee camp – we managed to convince him that as Arabs, some of us actually Palestinian, the NOX staff does care rather a lot about the 40-year occupation. Maybe even as much as he does.
Bad first impressions aside, we moved to a comfortable spot in Darat al-Funun, the scene of an exhibition and talk, and he proved more than willing to discuss his career-long commitment to the cause. “I am an ordinary guy,” he says. “There is nothing special about me. The special thing in this whole formula is the Palestinian people. They transform ordinary people to pro-Palestinian activists – this is why I am here, this is why I am now displaying my art in Amman. It’s the Palestinians. Me, I am just ordinary.”

A crowd of well-over 500 people who attended the event would no doubt dispute his claims of “ordinariness”. Latuff, a cartoonist from Brazil, came to focus almost exclusively on Palestine after his visit to Hebron in 1998 and a conversation with a local man. “Khalid Idriss did not know me, neither knew what I did for a living,” he explained in the talk. “To him I was someone from the outside and his story can be echoed through me. So he invited me to his home. He took out his wallet and started pulling out broken teeth,” Latuff recounted passionately. “I said, ‘Jesus Christ, what is this?’ And he said, ‘It’s all the teeth I lost to the butts of the M16s of both Israeli settlers and soldiers.’ He then brought his teenage daughter and lifted her shirt off her back to show me all the scars and wounds. So I promised him to get his story out. Today, I am still keeping my word.” 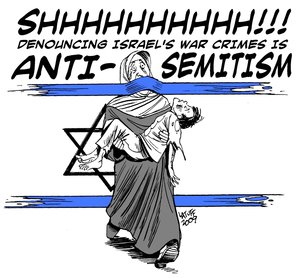 NOX: You were one of the top finishers in Iran’s 2006 International Holocaust Cartoon Competition. Aren’t you afraid of being accused of being anti-Semitic?

Carlos Latuff: Of course, I was bashed as a racist and anti-Semite. But have you seen the cartoon that won? It does not deny the holocaust, but actually reaffirms it. Today, we are witnessing a whole new holocaust against the Palestinians, and yet you can’t even say that in the media. I don’t care if people call me anti-Semitic, and I don’t care about what people think of me; I care about the Palestinians. It’s really amazing that when the Western media heard about the International Holocaust Cartoon Competition, they all cried “Rage!”. Just a few weeks earlier, they were defending “freedom of speech” over the Mohammad cartoon incident. Their double standards were exposed, and I saw a good a chance to make a point about the Palestinian cause.
NOX: Have you had many problems with censorship?


CL: In 2002, the Independent Media Centre in Switzerland was shut down over claims of anti-Semitism after they published my series “We are all Palestinians”. 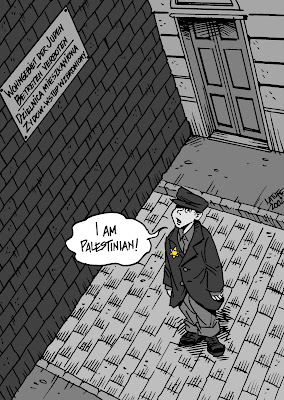 The cartoons portrayed Jews in the Warsaw Ghetto, Black South Africans, Native North Americans and Tibetans in China. All of these groups are drawn saying, “I am Palestinian”. A few months later, police in Israel arrested the editor. I have not only dealt with censorship, but also with police brutality, and blacklisting. I can’t visit Palestine because of my cartoons.
NOX: You sometimes need to rely on stereotypes to make the average person understand, but stereotypes can also be clichés. How do you create a balance?
CL: I have no problems with clichés. Cartoons should not only be accessible to intellectuals – they need to be clear enough to be understood by the janitor as well as the CEO. They should be like street signs, which everyone can understand. My real problem is fighting the negative clichés and stereotypes that people have.
NOX: An active member of Deviant Art, an active blogger, a supporter of Creative Commons... You are all over the internet. Would you say that the internet and social web was a main channel for your activism?

CL: Without the internet, this interview would not be possible. The internet has opened a very big window for me, and without it the mainstream Western media would have never published my work. Western media loves representing Israel as the victim, and as a result people see no difference between the Taliban and the PFLP! But I don’t have a Facebook account. There is a Facebook profile of an impersonator, but that’s not me. 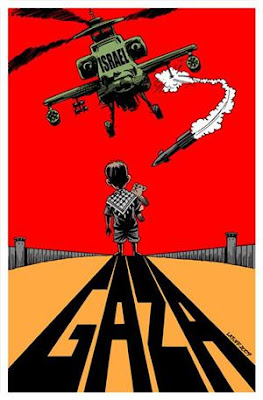 NOX: Do you see a change in the West’s outlook with alternative media providing a slightly more balanced view?
CL: Absolutely. I think that people’s perception of the Palestinian cause is slowly changing. For example, Brazilian magazine Istoé, which is equivalent to Newsweek, had “Terrorismo de Israel” on their cover with an image of a Palestinian woman crying in front of her ravaged house. I would have never thought in a million years I’d see the day when a mainstream Brazilian magazine would have the Palestinian cause on the cover!
Israel cannot keep convincing people that the 410 children who died in Gaza were killed for security reasons. Yes, Israel is losing ground, and I hope to help erode the credibility of Israel.
NOX: In a world where even air is packaged and sold, why do you encourage people to freely print and reproduce your work?

CL: It is very important for people all over the world to feel free to print out, reproduce and distribute my work however they wish. In a capitalist system, everything is produced for money, but my artwork is not for sale, they are made to be spread around, to counter the Western media war against Palestine. They are also to fight Islamophobia, although I am not Muslim myself. This isn’t about money, or cartooning, or anything like that. It is about love. I love the Palestinian people! I dedicate my art to Khalid Idriss, I know you are in Hebron and you can’t hear me, and I know that I can’t visit you because Israel has blacklisted me, but I am here in Amman, and I have kept my promise.

Carlos Latuff’s work can bee seen at his deviant art webpage.
He also has a comic series named Tales of Iraq War, where his superhero, Juba, is a Baghdad sniper.
~ reposted by Sofia Smith
Posted by Palestine Solidarity Demo Information Centre at 10:56 PM